I work and write at the intersection of technology, media, and society.

I Was Wrong About Mastodon

Micropub is a W3C working draft for a standard API that posts content to a domain. https://www.w3.org/TR/micropub/ #indieweb #socialmedia #openweb

The Indie Web Summit in Portland is go. I'll definitely be there. http://2016.indieweb.org/ #openweb #socialmedia 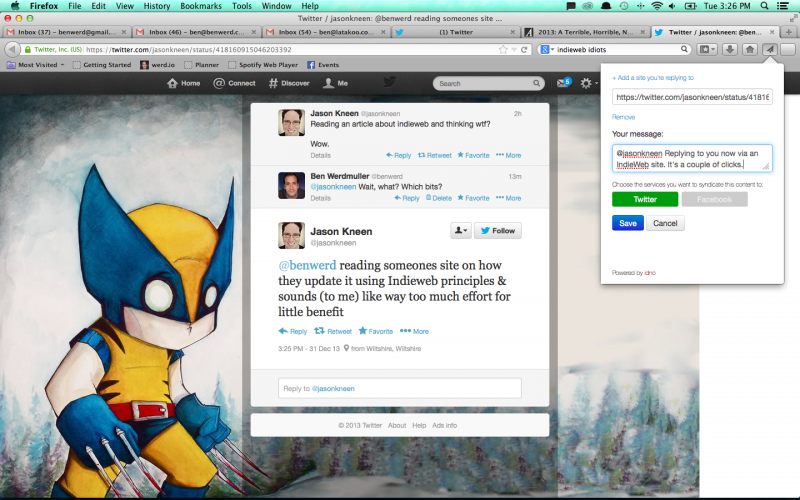 The #indieweb as a minimum viable social web ecosystem

This piece was submitted as a position paper for the W3C's Workshop on Social Standards: The Future of Business, due to be held on August 7-8, 2013, in San Francisco.

Much has been written about both the power of APIs to connect social applications in powerful ways, and vendor lock-in in the context of those APIs. Rather than usher in a new era of interoperability and open computing, APIs have allowed vendors to create new ways to lock users into their ecosystems.

In many verticals, simply gaining access to a product’s API documentation is enough to require complicated licensing arrangements, vendor evaluation of your business intent for the API, and often, an asymmetric Non-Disclosure Agreement. “Open” is the new closed: too often, the API is a proprietary product in itself. This is as true in social software as it is elsewhere.

This proprietary nature carries multiple business risks. Not only does it require that customers invest heavily in a particular vendor’s products, but should that vendor subsequently decide to discontinue those products – as happened recently in the case of Google Reader and a number of Yahoo! products – the customer must repeat that investment in another platform. Finally, recent surveillance revelations must be food for thought for any business using proprietary services to host sensitive data.

Sophisticated open API standards mitigate these risks, but developing support for these can require a significant expenditure, and the business case may not yet be clear to most vendors. There is no doubt that they occupy an important place in the emerging social landscape, but not all vendors, or their customers, can justify the level of technical expense currently required to “buy in”. Indeed, given a high enough barrier to entry, even ostensibly open APIs may inadvertently have the same ill effects as closed ones.

Although there have been significant advances in the field over the last five years, there remains a need to prove the business value of decentralized web technologies. To many of us involved in both the industry and the movement, this seems silly: after all, the business value of other decentralized technologies, like email and the phone system, are hardly questioned. Nonetheless, in a world where centralized data siloes regularly receive multi-billion-dollar valuations, the onus is on those of us who are building more open technologies to demonstrate their worth. Note, it is not enough to argue their worth: we must build, ship, and actively demonstrate a profitable product or service with a business model where the decentralized social web is an inextricable component.

I believe that these compelling business models exist, and that they are most easily discoverable in the enterprise. However, belief is not demonstration: we must continue to test and iterate them. During this exploration phase, this means that, our software and underlying protocols must be easy to write, adapt and change. Ease of development is more important than sophistication; we must not create our own technical lock-in before we even ship.

The “IndieWeb” movement was founded by Tantek Çelik, Amber Case and Aaron Parecki, around their annual IndieWebCamp event. Although it was originally created to encourage participants to self-host their own web presences (a laudable goal in itself), over the last year it has also begun to incubate a number of simple social web protocols based around Microformats 2 and Webmention.

At its simplest level, assets on the web are marked up with appropriate Microformats 2 classes, so that any parser may obtain a consistent JSON representation of their content. Linked targets on the page are then pinged using Webmention (or pingbacks), which alerts them to the presence of that content. They may then go back and parse the source of the ping, discovering content like comments, replies, event RSVPs and favorites. Adding more content types would be trivial, and indeed, more are emerging every week. If a content type is not registered, the target page may simply register that the source “mentioned” it.

An obvious further implementation incorporates signed HTTP requests for both parsing and Webmention pings, allowing for lightweight authentication so that protected resources can be selectively revealed.

The protocols and standards under development within the IndieWeb community offer some unique advantages for testing decentralized social models:

POSSE - Publish (on your) Own Site, Syndicate Everywhere, as coined by Tantek Çelik – accepts that your friends, contacts or customers are easier to reach on the social platforms they’re already using. Therefore, content on your own, independently-hosted platforms syndicate out to your audience across the networks they already use; links point back to the originals. In the short term, it becomes immediately possible to experiment with decentralized social models without losing your existing audience. Over time, it may be possible to transition those audiences to consume and interact with your web presences in a more decentralized way, ensuring that you can post on your terms, and they can consume on theirs.

While most implementations of POSSE concentrate on consumer social tools like Twitter, Facebook, Flickr and Foursquare, there is no reason why the same principle could not be applied to commercial platforms like Yammer, Avid Interplay, GitHub, Salesforce or SocialText – or any proprietary service used internally inside any enterprise, APIs permitting.

Idno as an experimental testing ground

Idno is one embodiment of an IndieWeb-compatible open source platform that can be installed across many hosting environments. It was originally designed as a replacement for older open source networking platforms, but rapidly evolved into a testbed for many of the ideas the IndieWeb community was proposing.

At the time of writing, decentralized social web activities supported by Idno include:

Due to its framework origins, Idno allows developers to easily build new post types. Indeed, support for events and RSVPs – at the time unsupported by any other IndieWeb-compatible software – were built in a single evening, with one developer, directly after an IndieWebCamp event. Other software produced by IndieWeb developers began to support events and RSVPs the next day. By the end of the week, at least three separate software platforms supported the content type. There is no doubt that the barrier to entry is low for individuals and businesses alike.

The rapid development that IndieWeb standards make possible is perfect for testing business models relating to the decentralized social web. This does not undermine the technologies and successes of the wider federated social web movement, or of other open social software projects; however, it does allow models to be tested much more quickly.

The relatively low barrier to entry of the IndieWeb also may encourage more developers to take part (as has already been shown), and as such, it seems likely that the standards that community is developing may find themselves in wide use for some time to come. An obvious analogy is RSS, which is not a sophisticated syndication standard, but saw widespread use due to its ease of implementation.

Many of the prevalent models for social software are hostile to the needs of both businesses and individual users. The IndieWeb aligns software developers with their users, while providing simpler tools for development, and encouraging both wider participation and more experimentation. I believe the result will be accelerated innovation in social software, and a much faster path to validating business models for the decentralized social web. I'm filing this under "coming attractions".