Drawing a line from @elgg to @withknown: an adventure in #edtech and #indieweb 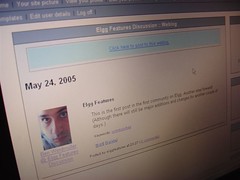 In November, 2004, we released the first version of Elgg to the world. We originally called it a learning landscape: an educational software platform that took its cues from the emerging social web rather than rigid classroom structures. In many ways, it was as much a reaction to Blackboard and WebCT as it was to Livejournal and MySpace.

And yet, people were learning from each other on the web all the time. Through platforms like Livejournal and Delicious, people with different skills and contexts were colliding and creating a new kind of culture. The web had made it possible for anyone to publish as long as they bought some web space and learned HTML. Suddenly, anyone could publish, as long as they could connect to the Internet at all.

Elgg took the social web, applied it to education, and wrapped the whole thing in an open source license. It took off like wildfire. 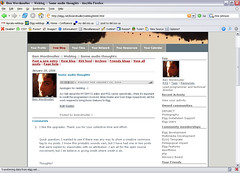 From the beginning, it was important to us that users got to control their own space. They could choose their own theme, and hack it, if they wanted to. Most importantly, they could choose exactly who could see each and every post: long before Mark Zuckerberg declared that the age of privacy was dead, our research indicated that students felt more comfortable with web publishing if they could keep tight reigns over who could see their work.

We knew Elgg was bigger than education when non-profits in Columbia got in touch to let us know they were using the platform. Soon afterwards, schools in Bangladesh were featured by the BBC for using it. Over time, as more non-education users emerged - more non-profits like Oxfam and Greenpeace, alongside Swatch, BMW, hedge funds, and the rugby star Will Carling - it evolved into a social networking engine that anyone could pick up and use. We started with a very specific use case - reflective learning in higher education - and widened into something much bigger. To date, Elgg users have included Harvard University, NASA, Hill & Knowlton, the federal governments of several nations, and the World Bank.

I made the choice to move on to new pastures a few years ago. Today, Elgg is managed by a non-profit foundation. The current team is doing an amazing job, and, under their stewardship, the platform has transformed again, into a programming toolkit for people who want to build social applications.

2. Known: the easiest way to own your own space on the Internet.

Meanwhile, individuals are in need of spaces that they truly control more than ever before. In the old days, we thought this was important to help them feel more comfortable with posting their personal reflections to a public space (not everything has to be about maintaining your "personal brand", after all). While that's still true, sites like Facebook are pointing to a more imperative need: a place to publish where you won't be experimented on without your permission, where you won't be spied upon, where you can move your content at any time, and where your content and conversations aren't owned by one of a very small number of corporate silos. Known is a platform for a new kind of social web. You can think of each Known site as being a single social profile, either for an individual or a group. Each one can interact with each other in a decentralized way (using indie web technology), or they can interact with all the other sites they use - including Elgg, as well as Facebook, Twitter, Foursquare and all the rest of them. Educational institutions are already asking us if we can integrate with learning management systems like Canvas - and the answer is, yes.

We have privacy, too. Known site owners can choose who can see their content, and they can choose the look and feel of their sites, including what kinds of content they want to publish.

We know that over 50% of Internet use happens on a mobile device, and any new platform has to take that into account. We've made Known fully responsive, so it works on any mobile device with a web browser, including your iPhone, Android phone, Windows Phone device, iPad, tablet, and so on. Even your BlackBerry works with Known. Because mobile usage leads to new kinds of content, Known supports location check-ins and posting photos while you're moving around. And, of course, individuals and organizations can roll their own content types using custom plugins. On any device, ownership of your site and content, combined with an understanding of your community, gives you a new kind of clarity about your online self. You know exactly who can see each item you post. You know who's responding to you on which networks, and you understand which kinds of content your audiences are interested in. Known is both a safe space to reflect, and a singular site that represents you on the web. And more than anything else, it's respectful software that puts you at the center of your online world.

Known is open source. As a company, we're providing software and customization services to make it easier for organizations to administer, as well as support subscriptions for everyone who uses Known. Finally, we're also working on providing managed infrastructure for anyone who wants to run Known, either individually or for their organization, without the hassle of server administration.

I've been privileged to spend over a decade working on open platforms that empower people and organizations to control their own spaces on the Internet. The pendulum is swinging back to a world where users are asking for that control, and I'm looking forward to making Known the definitive way to own your content online.

If you've read this far, you should definitely check us out: at withknown.com, on Twitter, and on AngelList.