It turns out that the origin of the missile scare that terrified Hawaii the other day was a poor UX choice. Instead of triggering a test alert, a civil defense employee accidentally triggered a real one - which then wasn't rescinded for 38 minutes:

Around 8:05 a.m., the Hawaii emergency employee initiated the internal test, according to a timeline released by the state. From a drop-down menu on a computer program, he saw two options: “Test missile alert” and “Missile alert.” He was supposed to choose the former; as much of the world now knows, he chose the latter, an initiation of a real-life missile alert.

He "feels terrible", according to reports. I bet.

It reminded me of a UX story that was relayed to me by a university advisor.

My computer science dissertation was on accident reporting: I built a system that allowed you to log events that led to an accident, and then draw weighted causal links between them (using primitive JavaScript, because this was 2001). You could then determine the root causes of an incident using graph theory, often revealing issues that might not have been obvious.

This particular advisor had been involved in assessing the incident at Three Mile Island. The controls to shut down the reactor were, as you might imagine, in a prominent, protected place in the operations room, to avoid accidental shutdowns. It wasn't quite a big red button, but it was close. Which was all fine, until a maintenance officer had to change the overhead bulb: they were observed climbing onto the console and placing their feet on either side of the shutdown control.

I don't know how true the story is, but it's good even if it's just a parable. Observing your user and understanding their context is vital if you're going to design something for them. That's particularly important if the consequences could be life or death, when surprising insights can mean the difference between war and peace.

I feel really awful for the people of Hawaii. I'm also not at all keen on the Cold-War-esque atmosphere that seems to be ratcheting up. May cooler heads prevail. 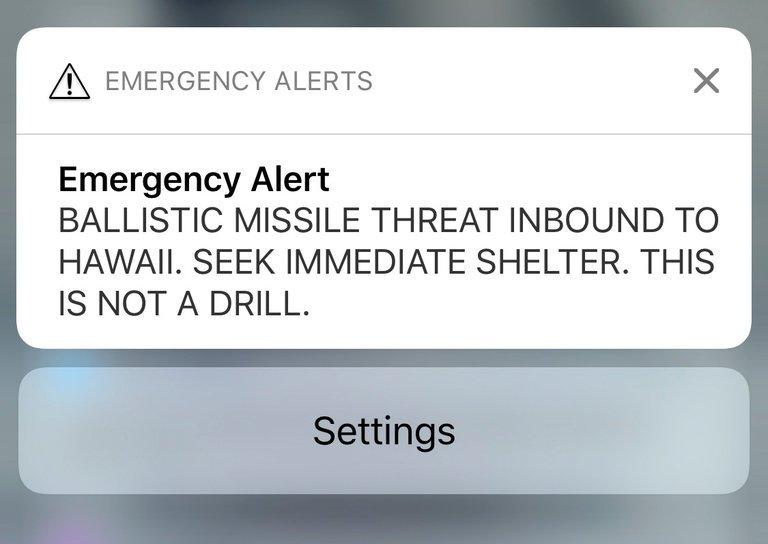