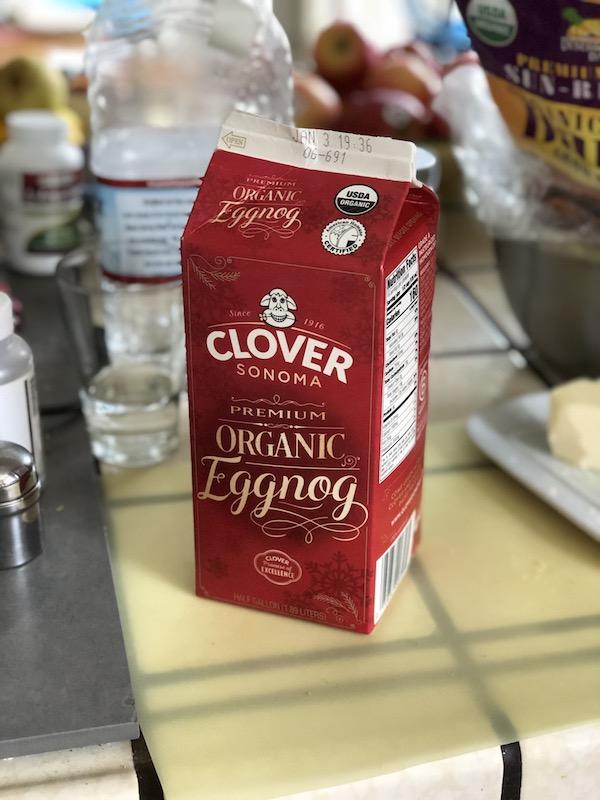 We have a half gallon of eggnog in the fridge.

I'm surprised by how old it is. I don't remember it really featuring in British supermarkets, and based on its modern incarnation - Christmas drinking custard - I would have guessed that it had been invented in maybe the fifties or sixties, for an America audience. But nog was already a kind of English ale in the late 1600s. Posset, an alcoholic drink where milk was curdled with wine or ale and spiced, was mixed with egg as early as the 1300s. The word "eggnog" is first recorded as having been used in 1775, the year before the Declaration of Independence was issued.

In 1826, military cadets at West Point rioted because they were served alcohol-free eggnog. In the end, some cadets went on a mission to a tavern a couple of miles away and came back with gallon jugs of whisky, before getting boisterously drunk and wreaking havoc across the Academy. In the end, 70 cadets were arrested.

Ten years ago today, my mother told us that she'd been diagnosed with idiopathic pulmonary fibrosis, the disease that at that time had killed my grandmother. She had finally got her persistent cough checked out, and gone through a series of increasingly invasive tests. And now, days before Christmas, we had the result.

The average life expectancy after an IPF diagnosis is 3 to 5 years. We didn't know what was going to happen, and typing this today, knowing this expectancy, I don't know why I didn't go through the logistical steps of moving to California to be closer to them immediately. There were things holding me back, of course - a whole life and roots and a network - but none of them were anywhere near as important. In the event, it took until she was carrying an oxygen tank on her back for me to pack two suitcases and make the jump. My grandmother had worn an oxygen tank, and then she had been gone. It was my first conscious introduction to losing a loved one, and I remember, at six years old, sitting in my bedroom while I heard my mother weeping in the living room. My grandmother had been in Austin, Texas, while we had been in Oxford, England, far away from her bedside.

Slowly, the trappings of my old life stripped away. Her diagnosis was a contributing factor to my leaving Elgg: suddenly, life was too short to deal with interpersonal bullshit. I had thought - hoped - that I was going to move with my girlfriend at the time, who I would eventually ask to marry me. That didn't happen, and it took me years to accept that it wasn't simply because I wasn't good enough. Every tie, save for those of friendship, faded. I was in California now, building a new life, trying to live while being aware, every day, of the undercurrent of tragedy that brought me here. Some days, I would attend an open data event and talk about open source. Some days, my mother would be helicoptered from a regional hospital in order to save her life.

Over time, it became clear that we're all at the forefront of familial pulmonary fibrosis; my mother was discussed at medical conferences. My mother saw symptoms in her sister, my wonderful aunt Erica, who she dragged in to see her doctors. She had two lung transplants. Over time, her son, my beautifully-spirited, generous, kind cousin, was diagnosed, too. We laid them both to rest last year and this year respectively. I think about them both every day.

My mother had a double lung transplant in 2013. I was in their home the night they got the call, the conversation soundtracked by the two refrigerator-sized oxygen concentrators running in parallel to keep her alive. Oxygen concentrators use containers of distilled water to prevent the oxygen from drying you out, and the sound is somewhere between a diesel generator and an aquarium. But suddenly, they were gone, and the torpedo-sized oxygen tanks were no longer a daily fixture. Somewhere I still have the discarded green plastic caps; one of us was going to turn them into an art project, but none of us could.

It wasn't an easy recovery. The following five years brought stomach tubes, throat surgeries, pneumonia, and dialysis. This year in particular has been one of the most difficult. There is talk of needing more surgery, but surgery is off the table. I treasure every moment. My dad is like some kind of superhero, looking after her diligently and with love, despite his own health slipping. There is sadness and stress in every day, but there's also so much love.

Research is now advanced enough to know that our familial pulmonary fibrosis is a symptom of dyskeratosis congenita, an incurable genetic condition that affects how you produce telomerase, an enzyme that protects your telomeres. These are the end-caps to your chromosomes, which shorten as you age, and with stress or illness. When you don't have the right levels of telomerase, your telomeres shorten prematurely. The effect is particularly pronounced in areas where your cells reproduce and are refreshed more frequently, like your lungs, and your bone marrow. The implications are terrifying, but there is one that isn't: it's possible to test for it.

This summer, my sister and I decided to get tested together. We were warned of the insurance implications, but Europe was our safety net; if we had the genetic marker and insurance became a problem, we would relocate to somewhere with a functional healthcare system. The probability of neither of us having it was less than 25%. I gave up meat and alcohol in preparation for having to get a lot healthier; I knew the kinds of tests they made you do to prove you could cope with a lung transplant. Mostly, I hoped that my sister wouldn't have it; I could accept my own life coming to a premature end, but not hers. She's the most amazing person I've ever met, someone I am proud and bewildered to be related to; her life ending would be like turning the lights out in the universe. But in the end, we were clear, and both of us openly wept in the genetic counselor's office.

I don't know how much time we all get as a family, but we have today. We have this Christmas. I'm so grateful for the bonus time. This week, this holiday, I'm maing a resolution to be present, in the moment. I want to remember everything.

We have a half gallon of eggnog in the fridge. I can hear my family now, awake and down in the living room. I'm going to go downstairs, pour a little eggnog in my coffee - those West Point cadets missed a trick - and join them.