Meeting subscribers where they're at

Yesterday I upgraded my laptop to OSX Mojave. Among the improvements: a desktop version of the iOS news app, which is slick. I checked into it a few times yesterday, and I expect I will again today.

Under the hood, it's a highly-curated feed reader. There's a proprietary API, but a lot of content is delivered via RSS (and there's an opt-out form for publishers, implying that Apple sometimes adds a feed without a publisher's permission). In fact, I did a quick search, and some of my favorite blogs are represented. Here's Fred Wilson's AVC: 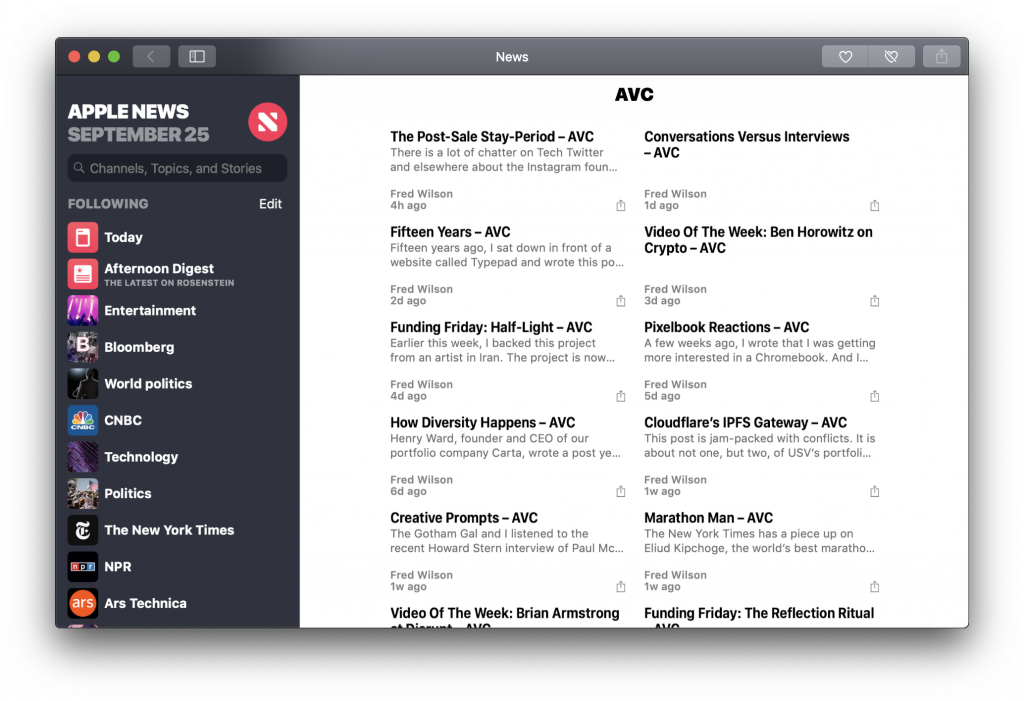 So I thought I'd add this blog to it, too. I signed up, and it turns out that they would vastly prefer you to use that proprietary API: 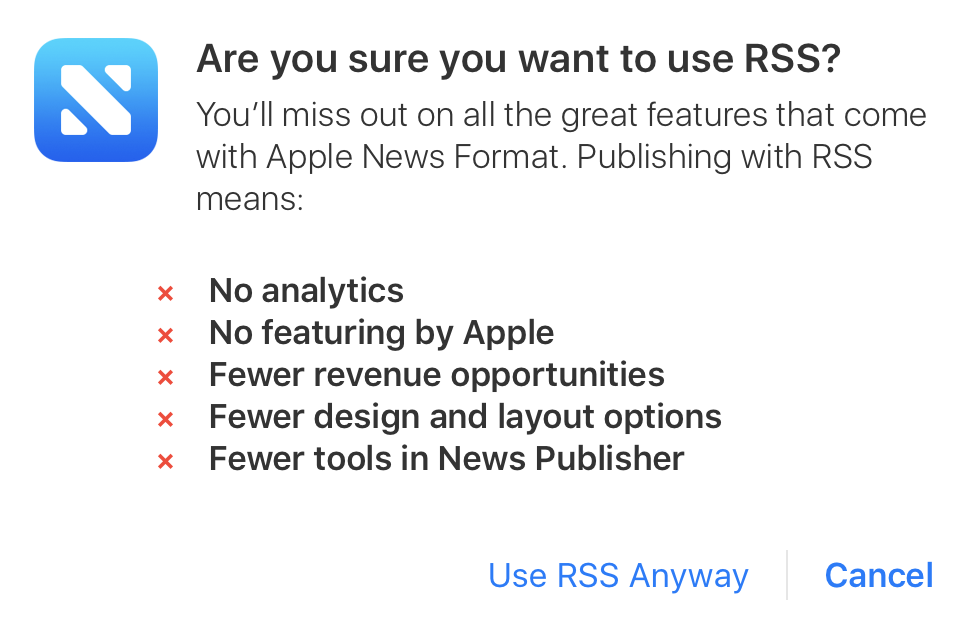 I'll go back and look at the API, but for now I decided that RSS was more than good enough. I submitted this site, and it's under review. We'll see what happens.

Meanwhile, a little while ago, I quietly started embedding a mailing list sign-up form at the bottom of every post. I have a system that, at 11am PT every day, checks for new posts and emails them to subscribers. It's not rocket science, but it has a major advantage over other ways of sending content: subscribers can just hit "reply" and have a one-on-one conversation with me. It's happened a few times now, and I love it.

Personally, I still love RSS. After a few years of doing without it, my reader app is my first stop on my phone each morning, and I check it again from my desktop every lunchtime. It lets me read thoughts from people I'm interested in (I don't subscribe to brands) in a calm way. I wouldn't have seen a lot of the most interesting pieces on Twitter or Facebook, because they're not emotive enough to rise through the algorithm. But I get a lot from them. RSS feeds also power podcasts, which I'm addicted to; they're one of the best parts of the open web.

But it's different for everyone. I know that most people don't use text-based RSS readers, and I'm not dogmatic enough to require that they do that if they want to keep up with this blog. So, there's a mailing list option, and I'll keep tweeting links to new articles.

It shouldn't be a reader's job to figure out where to read a particular publisher's content. It should just be there for them, in their app of choice. The only reason to force someone to use a particular option is for monetization, but ultimately, that will be true there too: monetization options for independent publishers need to reduce friction by accompanying content wherever it can be read. Whether it's paid feeds, paid mailing lists, advertising, or whatever the publisher needs. If apps and gateways for readers use open standards and protocols behind the scenes, publishers get the ability to add their content easily, and everybody wins.

If you liked this article, feel free to subscribe - via email, using your feed reader of choice, or wherever you read your content.

See? Easy. That's what the future of publishing will look like.