In 2013, my mother had a double lung transplant. The rules for recovery post-transplantation are that you can't have a bridge between you and the hospital; they don't want you to be stuck in traffic if you need emergency attention. So we rented an apartment in the Inner Sunset, where we all sat with Ma while she recovered. My Dad was there all the time as her primary carer, but nonetheless, sometimes I slept overnight on an air mattress.

As her speech returned to her and her energy increased, she told me that she wished she had a place to speak to other people who had been through the same ordeal. But at the same time, she wasn't comfortable sharing that kind of personal information on a platform like Facebook.

She was asleep a lot of the time. So in the evenings and weekends, I started to write that new platform for her. I gave it what I thought was a quirky but friendly name - idno - which spoke to identity and the id, but I also thought sounded friendly in a slightly foreign-to-everyone kind of way.

At the same time, I became involved in the IndieWeb community through Tantek Çelik and Kevin Marks. And I realized that this platform could easily be modified to work with the microformats standards at the root of that movement. I built decentralized replies and commenting into the platform. That summer, I flew to IndieWebCamp Portland, and demonstrated the community's first decentralized event RSVPs. There, I met Erin Richey, and we began to collaborate on designs for the platform.

I had previously met Corey Ford, co-founder of Matter, and it turned out he was looking for startups as part of Matter's third cohort, which would begin in May 2014. Erin and I decided to collaborate (with the encouragement of Corey and Benjamin Evans, now the leader of AirBnb's anti-discrimination team) on turning Idno into a real startup. Here's the real pitch deck we used for our meeting (PDF link). The idea was to follow in WordPress's footsteps by creating a great centralized service as well as an open source, self-hosted platform for people that wanted it. For the business, the self-hosted platform would act as a marketing channel for the service; for the open source community, the business would fund development.

We were accepted into the third cohort, and quickly incorporated so we could take investment. Erin in particular felt that Idno was a crappy name, and undertook her own research on a shortlist of new ones. Her process involved figuring out which names were easily understandable if you just heard the name, and which could be easily spelled, using a battery of Amazon Mechanical Turk workers. Known was the very clear winner.

Everyone's favorite part of building a startup is choosing the logo. Here are a few I built that we rejected: 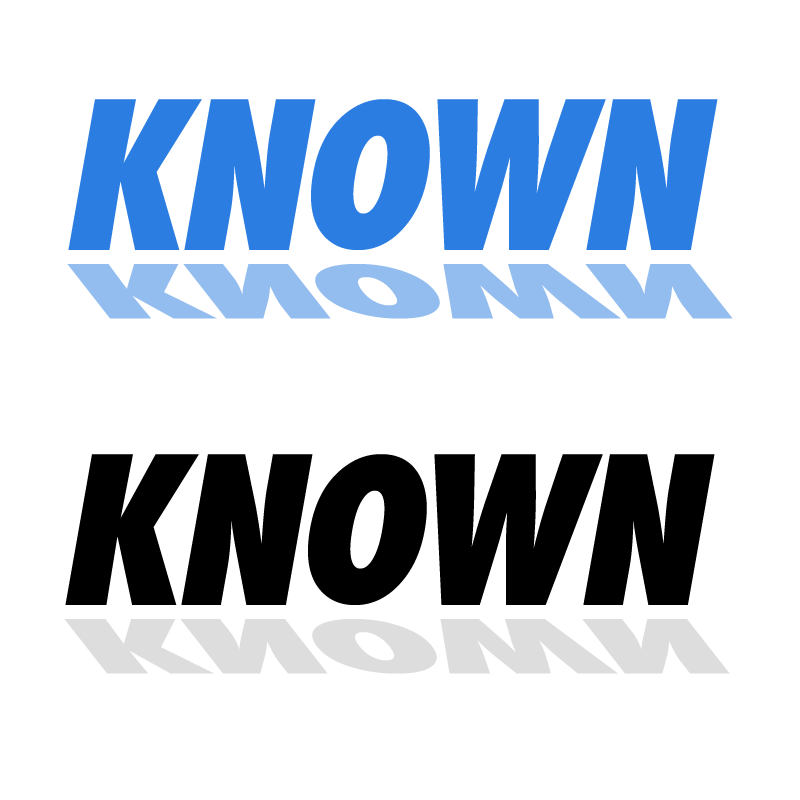 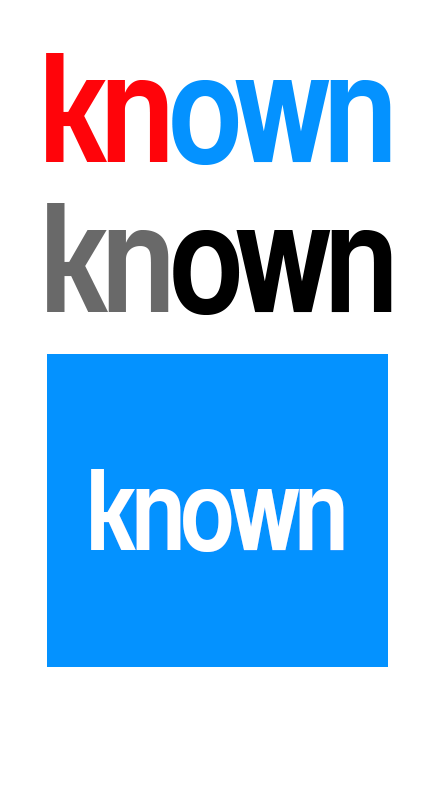 I think I thought the "kn-own" wordplay was cleverer than it was.

In the end, we went with this logo that Erin drew:

"It looks like the Circle K," my mother said. Still, we went with it, not least because the K in itself would work well as an icon.

I've written a lot over the years about the Matter process: suffice to say that it changed the way I think about products and startups forever, as well as, in many ways, my entire life.

While the open source community continued to grow, the startup itself didn't work as well as I had hoped, both as a business and as a high-functioning product team in its own right. Over the course of the five month program we chose to double down on individual websites over building communities, and then we decided to start with education as a go-to market. I don't think either of these things were the right decisions for a startup in retrospect, and as we presented at demo day on the stage of the Paley Center in New York, I could see disappointment written on a few faces. Here's that full pitch. If you read the initial pitch deck, you'll know that a lot changed - both for good and bad.

Known was half-acquired by Medium in a way that saw a return for Matter. (Because of Known's social media syndication capabilities, Medium did not want to acquire the software, and did not legally acquire the corporation.) One important role of a founder, which I learned from Evan Prodromou, is to be a good steward of investor value. In this case, it was important to me to also be a good steward of community value, and the deal with Medium allowed the community to continue to exist. Erin became acting CEO of the corporation and continued to work on the project. Eventually, I left Medium and joined Matter as its west coast Director of Investments. The work I did there encompasses the proudest moments of my professional career.

Fast forward to the end of the 2019, and Marcus Povey (a friend and frequent collaborator of mine, who also worked on Elgg) has picked up the community baton. Thanks to him, Known just released version 1.0. The community continues to grow. I just put together a draft roadmap for two further releases: one this summer, and one for the end of the year. These releases are free from any attempt to become a commercial entity or achieve sustainability; they're entirely designed to serve the community. They're all about strengthening the core platform, as well as increasing compatibility with the indieweb and the fediverse.

For me, the collaborative group functionality is still something I think about, but it won't be the focus of Known going forward. I'm considering an entirely new, simpler group platform (third time's a charm). Known is about creating a single stream of social content, in a way that you control, with your design and domain name. Its journey hasn't been a straight line. But I'm excited to see what the next year holds for it.