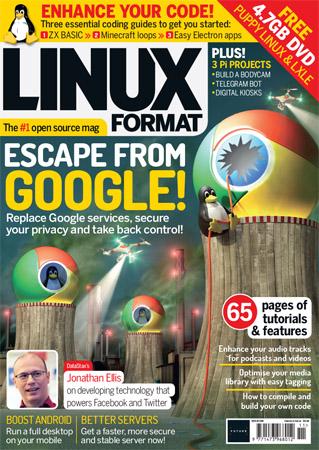 For this month's Linux Format magazine, I was asked to comment for a piece about how Google isn't living up to its "don't be evil" motto. This phrase was removed from Google's code of conduct in 2018, but it's still thought of as being part of the company's DNA.

My opinion is that Google itself shouldn't be singled out in itself - in many ways it is a more ethical big tech company, but it operates as part of a troubled ecosystem. Linux Format's Mayank Sharma asked me a few questions for a quote, but decided to run the conversation almost in its entirety. The magazine made the legal decision to edit out a comment I made about Facebook's role in genocide, so here's the original version from my emails with Mayank. This interview took place after my role with Unlock came to an end, and before my role with ForUsAll began. I speak for myself alone.

You should buy the latest edition of Linux Format on your local newsstand, or from its website.

Q. I am personally not a fan of Google’s business model that’s been the basis of what’s now known as “surveillance capitalism”. What, in your opinion, is Google doing wrong? Is there more to Google's evil than just privacy intrusion?

Let's be clear: Google is participating in the prevailing business model for internet businesses in Silicon Valley. So in that sense, they're not more evil than any other business that seeks to make money through personal data. You could also make the argument that they're not as directly harmful as a company like Facebook, whose data practices have been shown to have undermined democracy in countries like the United States and Britain, and even to have supported genocides in countries like Myanmar.

However, the impact of Google's business is exponentially greater because of its size. From widespread location collection in Google Maps, to the fact that the majority of sites on the internet host Google tracking code, it's very hard to not be tracked and profiled by them in some way. That information has the potential to be cross-referenced, together with offline information like credit card purchases, which it adds together to create a highly targeted profile.

The irony is that targeted advertising - where advertising is highly tuned to the profile that has been created for you through invasive tracking - is not really more effective or lucrative than simple contextual advertising! So Google's real harm may have been to incentivize the creation of a sophisticated worldwide surveillance network, for the sake of surveillance itself. Surveillance has chilling effects on free speech: people who know they're being watched behave and express themselves differently. And that has a real effect on democracy. Not to mention the potential for harm should a government with ill intent seek to harness that surveillance network for its own ends. Should tech companies have built systems that allow the current US administration to track immigrants and deport them? I think the answer is a clear "no" - and the only way to prevent this is for the surveillance apparatus to not exist in the first place.

Q. How do you escape from the clutches of Google? Is self-hosting the only real option?

Privacy is a group inoculation. Even if you self-host, there's nothing to prevent your information from being inadvertently gathered by your friend who hasn't taken the same steps. Not to mention that self-hosting is really hard! At its simplest, you need to know how to use command line tools (or, if you're using shared hosting, be comfortable with FTP). At its hardest, you need to have some server administration skills. For those reasons, I don't think self-hosting is a real solution to the problem in itself. There are lots of other great reasons to self-host: having full control of your web presence and data, if you have the means and the skills, allows you to better represent yourself online.

You can also make ethical technology choices. Use a web browser, like Firefox, that protects you. Choose an email provider, like ProtonMail, that has built-in privacy protections. If you're building a website - or particularly, running a web business - make careful choices about which data you really need to gather, and through which provider. Consider using an open solution like Matomo for your website stats instead of Google Analytics. Support small businesses that are transparently making ethical choices over giant companies that may not be.

But because it's a group inoculation, we need a better vaccine for all of us. More on that in a moment.

Q. Do you think going “back to formula” and adopting open web standards is the way forward?

First, there needs to be a clear alternative to the Silicon Valley venture capital funding model. People who build software need to be able to put food on the table; it's not a question of not being able to make a profit. But venture capital incentivizes companies to grow exponentially. Actually stopping to take money from consumers is a limit on that growth, so those companies tend to use advertising and data brokerage as revenue models instead. Movements like Zebras Unite see the harm in this and are trying to establish alternative funding models. Teams, including open source projects, need to take concrete steps to become more diverse; because the negative effects of surveillance are disproportionately felt by vulnerable groups, affluent, white, male teams often didn't understand the issues.

We also need to do much more work to make sure open source developers can make a real living from their work, and move away from the "free as in beer" perception of open software. People should choose free and open source software because of the freedoms and reassurances inherent in open development processes and licenses. If they just see it as a cheaper alternative, fewer startups will choose open models, because they can't make money that way, and the traditional VC model will continue. We're seeing more successful open source infrastructure companies, but I'd like to see more end user open source software find its way to real profitability too. For that to happen, we need much stronger support for those companies. I'd love to see more funding opportunities, as well as open source accelerators and advisory programs.

Finally, there has to be regulatory reform in two main areas. 1: We need to reform antitrust rules and prevent these data monopolies from existing in the first place: no company should ever be big enough to establish a global surveillance network. It's absurd. Technology monopolies are harmful, and in a world where software is a part of every part of our lives, we can't afford to hide behind techno-libertarian ideologies where government is always bad. Government can help us establish sensible rules that protect citizens; it's what it exists to do. 2: We need strong privacy legislation. The industry clearly cannot self-police on this front. GDPR is flawed but has had positive effects - particularly in the ways that organizations have changed how they think about privacy. California has new privacy legislation that will take effect in 2020. Every jurisdiction should enact sensible protections that encourage good behavior and punish violations.

Nonetheless, innovation has a strong part to play. I helped to build the Unlock Protocol, which is a decentralized way for creators to independently make money for their work. This stands in contrast to advertising models: here, selling paid memberships becomes a decentralized layer of the web, just like HTML, CSS, or JavaScript. You don't need to go through a middleman, and Unlock doesn't levy any fees. Other providers, open source and otherwise, can roll it into their products. The hope is that using direct revenue - and experimenting around revenue-based business models - will become easier and more lucrative than surveillance-based models. The VC / ad model is by far the easiest for product owners right now, but we can change the ecosystem by lowering barriers to entry to other business models. That way people who are starting new startups and products can find a business model that works best for their users, rather than letting venture capital dictate how they make money.

Again - you can buy the latest edition of Linux Format on your local newsstand, or from its website.