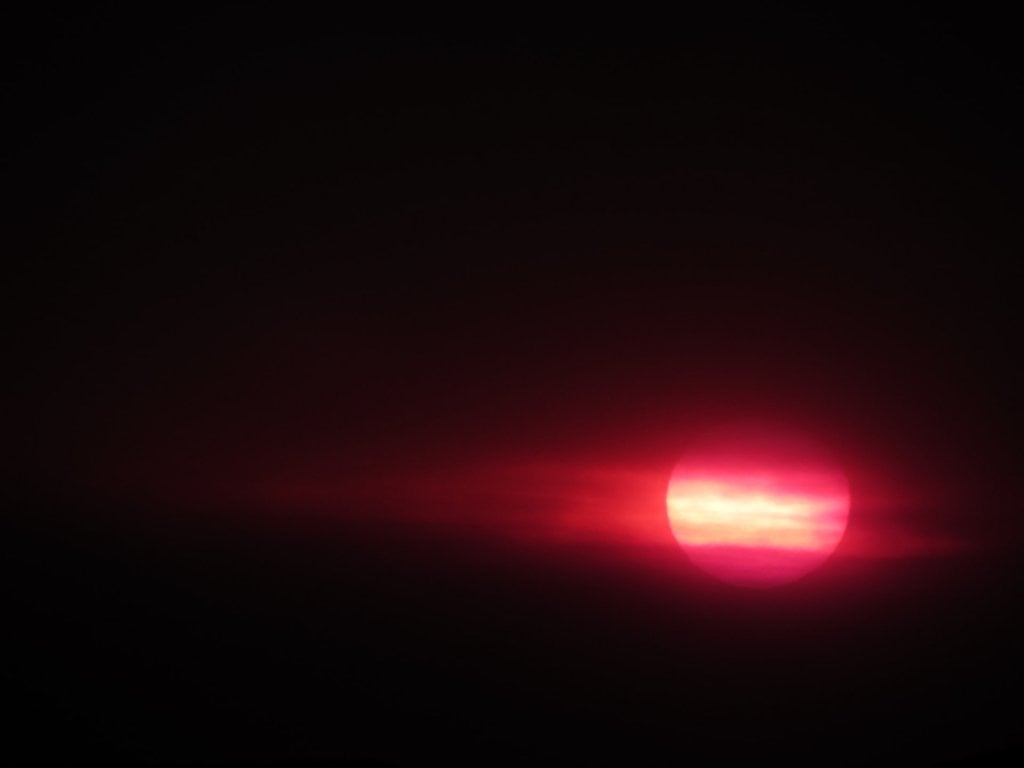 I'm sleep-deprived because I had to evacuate my parents from their home last night, but adrenaline is keeping me awake. We drove away as the fiery glow appeared over the hill, and a stream of fire engines, sirens blazing, sped in the other direction. The Safeway at the corner where I sometimes sneak off and buy deli counter chicken tenders is now the fire staging area. The street where I go for walks to hit my daily active calorie count has been bulldozed to try and make a barrier to stop the spread.

The ash on my car this morning was like a layer of sand; each grain, a fragment of something destroyed. The smoke hangs in the air and turns everything red. It falls in chunks, like snow.

"Fire season" is a phrase we say now. I guess there was always a prime season for wildfires, which ran from May to October, roughly, but it's only really been a part of the lexicon since the Tubbs fire tore through Santa Rosa in 2017. The air was thick with smoke then, too. We used to worry about earthquakes - "the big one" - and now we worry about heat and wind.

My mother is sitting in a chair at a chain dialysis center, receiving treatment for the side effects of drugs she takes to manage a double lung transplant she received seven years ago. She never drank or smoked; always ate right; always exercised. Genetics got her in the end, as it did my grandmother and my aunt. She listens to books and browses the web on the iPad I bought her while a refrigerator-sized machine cleans her blood. The patients sit in rows while the machines churn blood around their coils. It looks like a gothic datacenter. She sits through it with surprisingly good humor, just as she sits through her hospital visits. Last week, she was in the ER. This week, she needed a blood transfusion. Whenever some politician talks about removing protections for pre-existing conditions, dropping it into a speech because it tests well with a certain kind of conservative, I wonder how I'm supposed to keep my mother alive.

When we knew we had to get out, I booked a hotel near the dialysis center. I feel privileged to have both the means and ability to do this; it meant we could pack up, drive out, and know where we were going. The evacuation site at the Sonoma County fairgrounds, and a few others, filled up and stopped taking people late in the night. The hotel lobby began to fill with people who hadn't booked, and hoped there would be a vacancy. Elderly people in masks, often holding dogs or cats under their arms, milled about in the lobby hoping a no-show would free up a room.

I spent my morning frantically trying to find food that my mother could eat before dialysis. She can't tolerate much, but her feeding tube doesn't provide enough nutrition to last through a day. Ordinarily, we find ways to cook for her, but that requires a kitchen. Takeout food, which would be my first choice in this situation, is too salty for her, or has ingredients she can't digest. The WalMart next door had been ransacked by fire evacuees; the only edible food items left were PopTarts, which aren't on my mother's menu. At Raley's, further away, we found microwaveable oatmeal and some strawberries. As I loaded the car with food, I tried my best to prevent the ash from sliding through the open doors.

We packed my mother off to dialysis, rearranging the back of my car so that her wheelchair would fit without removing the foot pedals. I bought a coffee from the Starbucks in the hotel parking lot (brown) and sat in my room, finally immersed in peaceful silence except for the 1970s hum of the air conditioner. Finally, for the first time since we rushed out of the house, I took a shower.

Logging into social media again felt as if I had peeled open a wormhole into an alternate reality. "Blockchain is what happens after Silicon Valley," read one tweet. It turns out what will really happen after Silicon Valley is scorched earth and ash from the sky. The importance of politics has escalated from differences of opinions about how we organize the economy into something closer to life and death. The tendrils of the climate emergency are snaking closer and closer to our homes. There is an out-of-control pandemic taking our loved ones. There are concentration camps on the borders and immigration raids in our communities. And there is undisguised authoritarian racism coming from the White House.

While I was offline, a company called Coinbase, where I have spent a fair amount of money over the years, made a statement about its "mission focus". It is the worst kind of bullshit. It's a disingenuous, hollow statement against placing inclusion and morality at the heart of business. It's an argument not just for the status quo, but for going backwards in time to find the old status quo. It paints Coinbase, and companies that support a similar stance, as safe places for the broey, exclusionary, overwhelmingly white masculinity that still permeates any space with money and power. It would be a hard pill to swallow at any time. It just so happens that right now, the sky is on fire and the world is succumbing to fascism. The timing is, in itself, a tell.

We learned that the 2016 Trump campaign used Facebook to actively attempt to deter 3.5 million Black Americans from voting. It doesn't matter if the ads were effective, although I would be surprised if they weren't; what matters is that the campaign had the intention, and the Facebook platform presented itself as a way to get it down. There is no way to work at Facebook without being complicit. Nor for Trump: perhaps coincidentally, Brad Parscale, the digital advisor for the 2016 campaign, was taken into custody after threatening to take his own life.

As always, there are tweets and hot takes and memes. Irregular patterns draw your eye away from what you're not supposed to see. But we can choose to focus.

The surrealism of this year invites us to not take it seriously. The horror is dream-like in its absurdity. The facts and implications are so outside the parameters of ordinary life that they seem outlandish. But the sky really is red with flame, over two hundred thousand Americans alone really are dead from the pandemic, there really are unmarked federal soldiers in our cities, people really are being swept up by ICE in the dead of night and kept in concentration camps, and the worst really may be yet to come.

We can choose to look away. That option is always available to us. But to do so is to accept our fate, and to acquiesce to those who would harm us to make a profit. Today, watching the ash continue to fall and wondering if my mother will make it through another dialysis, I'm not at all prepared to do that.

Photo by James Todd on Unsplash.