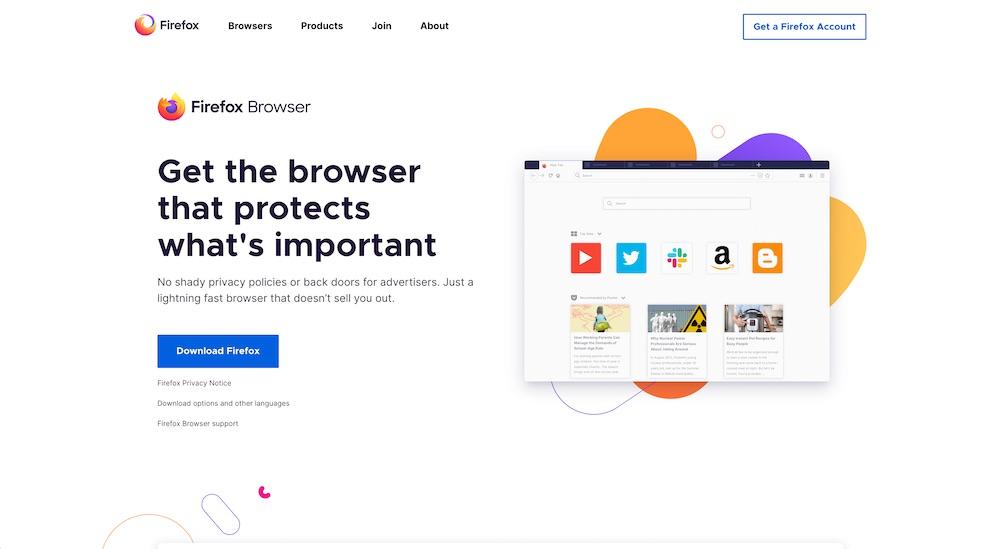 Firefox matters. The other major browsers are all subject to a larger corporation's business interests: Safari is built in the context of the App Store, Chrome must support Google's ad targeting business, and Edge fills a gap in the Windows ecosystem. But Firefox is here to fight for the users: it supports web standards and user privacy as public goods in their own right.

It also happens to be the best browser. It's the one I choose to make my default at home and at work, not for ideological reasons, but because it works the way I want it to. It's fast, private, functional, and more resource efficient.

Even if it wasn't, its existence would be important. In the same way that it's harmful for most people to get their news from Facebook, giving that corporation undue power over the flow of information that informs voters and underpins democratic society, it's dangerous for most of us to access the web through Chrome. In a world where so much of our lives are threaded through the web (particularly during the pandemic), giving one corporation control over the way the web works hands them the same kind of undue power.

And, of course, it's open source. Firefox is built in the open, using a community-driven approach. That alone makes it unique among the big browsers.

Mozilla is one of the few unabashed forces for good in the tech industry, which is why the news that it had laid off a quarter of its workforce hit me hard. It deserves our support.

But these two things can be true at once: Firefox is an important force for good, and it's a squandered opportunity that has not shown the way on the web as often as it should have. In service to Mozilla's desire to provide it for free - perhaps remembering the paid-for Netscape's loss to Microsoft's free Internet Explorer long ago - it has been funded by a small handful of default search engine agreements. There has been no revenue innovation; very little feature innovation that would rock the boat of those lucrative agreements.

It seems odd for a privacy-aligned, community-driven web browser to be largely funded by targeted advertising. It's also a textbook business risk: all Google needs to do is withdraw its check, and Firefox is toast. Something more diversified and reliable is clearly needed.

Mozilla's acquisition of Pocket was a foot in the door for subscription revenue models. Its new privacy-orientated VPN -  sadly not available on macOS yet - is an expansion of that strategy. But it's been executed far from perfectly, and an unanticipated revenue gap was the declared reason for Mozilla's first layoff this year, back in January.

I make a donation to the Mozilla Foundation every month, but I don't pay for Pocket (which I use every day) or the VPN product (which I can't use yet). I suspect many users are like me: we deeply appreciate Mozilla's work, but we're not that excited about the subscription products. Mozilla has done a bad job at targeting us: I'm not sure why it hasn't been possible to become a patron from within Firefox, or to pay an all-in Mozilla Subscription analogous to the rumored Apple One, but I would have jumped on those chances.

Over the last few years, the Guardian has broken even because of reader patronage. Unlike a paywalled site, where only subscribers could access content, readers like me pay to allow everyone to access its journalism. We do it because we find its existence valuable. Wikipedia is another organization that makes a patronage model work. Mozilla occupies a similar place in the world: a socially-positive organization with a minority of users who are affluent enough to pay for the rest, and will do so because they believe it's the right thing to do. There hasn't been a unified strategy to pursue this, but there should be.

There's no need to create a bazillion new revenue-generating products. A VPN is great, but there are lots of VPNs to choose from; a reading app is fine, but there are loads. There is only one community-driven vendor of privacy-preserving internet tools with a focus on keeping their users safe. Mozilla needs to focus on what it does best and do better at letting its community support it. We understand its importance, and we're here for it.

You should install Firefox today.