The trough of sorrow

Every startup goes through the trough of sorrow. I've found it to be a useful way to describe the period that comes after initial enthusiasm and before things start to work out. It turns out it's quite a useful metaphor for non-startup life, too.

There are lots of drawings of it out there on the internet. Here's my interpretation: 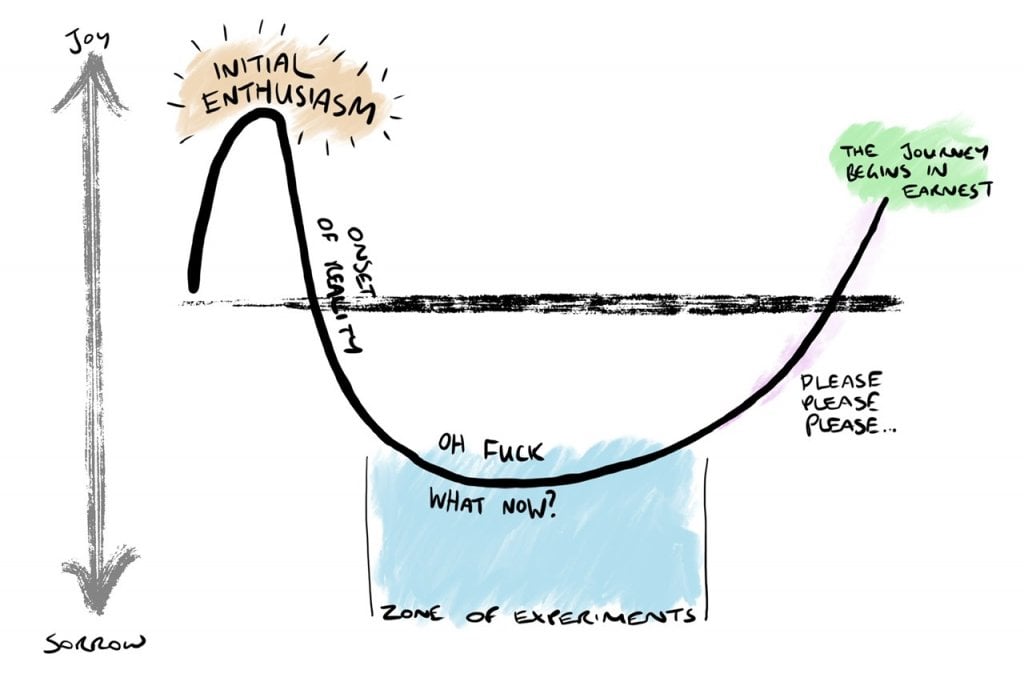 Every new big endeavor comes with an initial rush of enthusiasm. You're elated by the possibilities. This is going to be amazing!

Then reality sets in, and the deep slide. "Oh fuck," you'll ask yourself. "What do I do now?"

And that's when you start to experiment. You have to. The thing you thought would work probably won't. Your initial ideas are probably wrong. The story you told yourself during that initial rush of enthusiasm was just that: a story.

You could stay in this trough of sorrow. Many startups, and many people embarking on creative projects, do just that. They cling too needily to their initial idea, or are ineffective in their experimentation. They run out of steam. Sometimes, when more than one person is involved, they start to fight with each other. (65% of early-stage startups fail because of preventable human dynamics. I would bet that more fail because they run out of hope.)

I've been through the trough of sorrow for virtually every startup I've ever worked at: the two I founded, the two where I was first employee, and the one with a hundred million dollars in the bank. Some made it; some didn't.

I've also been through the trough of sorrow for every creative project I've ever made. For some of them, I was able to persevere and make it work; others, I abandoned.

It's about experimentation, it's about luck, it's about treating yourself and your team well, and it's about being able to let go of your precious ideas. If you treat the endeavor as a fait accompli, or go about it as you might in a large organization where you've already found your feet, you will certainly fail. On the other hand, if you embrace a spirit of creative curiosity, there's everything to play for.