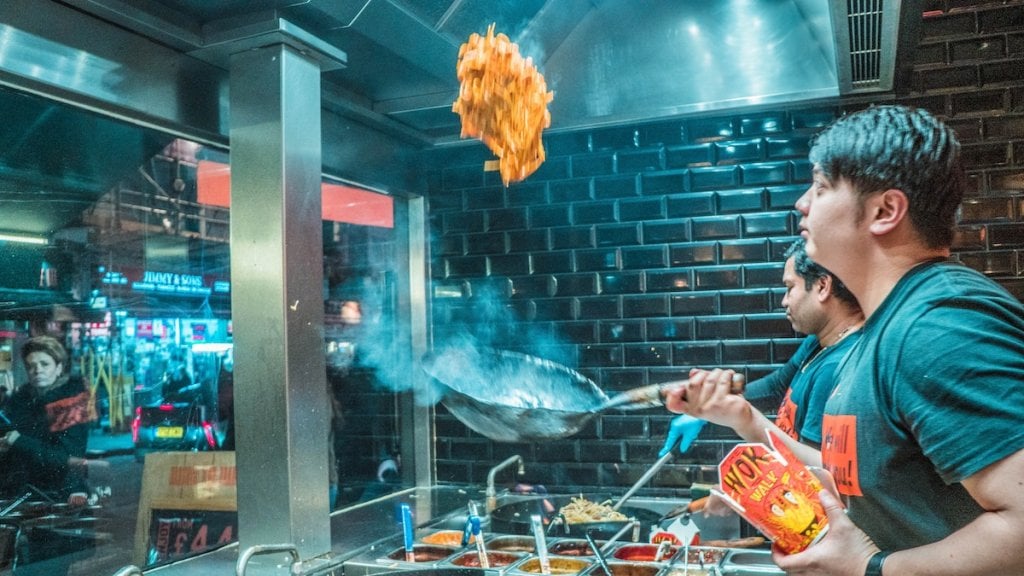 The best part of traveling is the food.

You can learn so much from how and what people eat. The way they gather, the smell of the spices, the sizzle of oil in great pans, the delicacies that only come from the sorts of hole-in-the-wall places that locals protect with their lives.

I’ve never been a fussy eater. I explore new places like a toddler: taste buds first, every nerve in my mouth feeling out a new experience. There’s so much joy and humanity to be found in food - and in particular in the kinds of food that are cheap and accessible. Fancy restaurants are all very well (I’m not knocking the skill and artistry involved in a Michelin-starred meal) but the kind of place that can become someone’s regular joint is beguiling. The food is the basis of a relationship that forms over time.

I drove across the US twice last year. Heading east, we went the northern route, through Glacier National Park and the Montana plains. Heading west some months later, we traveled south. Every time we tried one of the headline places to eat - the tourist traps, in other words - the food paled in comparison to the places where locals went. In New Orleans, Cafe du Monde is a fun experience, but the food doesn’t compare to unpretentious spots like Stuph’D.

And just as food is tied deeply into the identity of a place, so is it tied to the identity of a person. We all have the dishes we love, which make up the fabric of us; the ingredients we enjoy, how and when we cook, if we cook at all, the smells we produce in the kitchen and the smells that attract us at the table. Whether our cooking is a whole thing or if it’s something we do regularly, it’s part of our self-image and the image we project. We need food to survive, and our relationship with it reflects us.

When people ask me where I’m from, I sometimes joke and say, “I come from the internet”. In some ways that’s true, but the joke stops here: I’m in no way from the place that produced pink sauce and baked feta pasta. Food, more than anything, links me to the places I came from.

I really learned to cook from my Oma, who brought her Indonesian dishes to California when my dad’s family emigrated in the sixties and adapted them for locally-available ingredients. She loved cooking for her family, but began to lose strength. So she gave me instructions: sayur lodeh and nasi goreng under her direction were my first adventures in mixing spices and building flavors. I grew up with these meals, regular weekday occurrences rather than exotic events, but no less delicious for it; I was pleased to learn how to reproduce them.

We ate a lot of Italian and French food, common to many American families of any origin (despite being in England): lasagna, quiches, homemade pizzas, spaghetti. But my mother’s Ukrainian Jewish ancestry led us to eat piroshki and borscht on special occasions; matzo ball soup; latkes; challah. Our meals were hearty. “Do you eat foreign food every day?!” one school friend memorable said when he came over. It wasn’t foreign to us; it was ours. “Eat, eat,” my great grandfather used to say, “it’s good for you.” Grandpa Dave was PA Joint Board manager of the Amalgamated Clothing Workers Union of America; here’s a story about a holiday complex he helped build for union workers.

Despite living in England, at no point did we eat English food, which I was left to discover as an adult. I didn’t have so much as a Sunday roast until I was in my twenties: it just wasn’t part of our culinary milieu. Of course, then I leapt on it, and writing this in California I find myself missing Yorkshire puddings and pork pies.

Locard’s exchange principle dictates that every contact leaves a trace. Although it was developed for forensic investigations, it’s equally applicable to people and migration: the places we’ve been all rub off on us, and we rub off on them. I’m a Ukrainian-Jewish-Indonesian-Swiss-Dutch-American who lived in both England and Scotland for decades. Each of those places left some trace on me, directly or via my family, and my descendants will find that they have rubbed off on them too, even if each of those ingredients has a slightly different potency to mine. They will have their own distinct identities, while also reflecting what and who came before them.

And of course, the same is true of everyone. Each of those chefs in the hole-in-the-wall joints serving food to their regulars has their own combination of ingredients that led to them. We’re all constantly leaving traces on each other, part of a tremendous, delicious mix. The more we mix and ebb and flow, the greater the tastes we may experience. To be fussy and reject new tastes, or to demand it be anglicized or made pristine, is to reject new people and other ways of life.

Taste is part of life. It’s one of the best parts of living. We are, literally and metaphorically, what we eat.

Photo by Miquel Parera on Unsplash