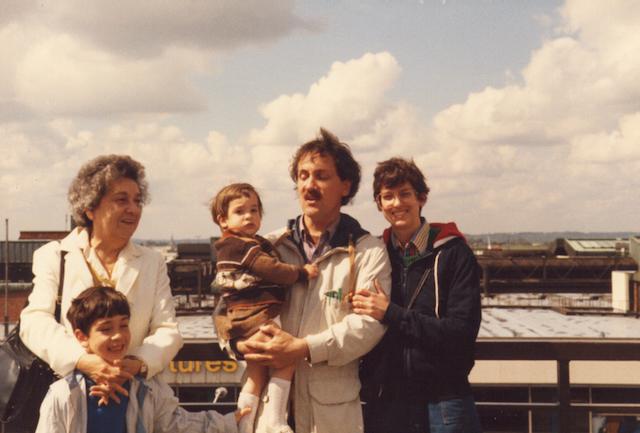 Something I’ve learned over the last decade is that I have a very different relationship to place than many - perhaps even most - people.

I come by it honestly. In my nuclear family growing up, each of us had a slightly different accent, shaped by our respective journeys. My dad’s is Dutch; my mother’s was American; my sister and I sit in different places along the British-to-American spectrum, and have fluctuated along that axis throughout our lives.

Parts of my family ancestry moved by force: concentration camps in Indonesia and pogroms in Ukraine. But even on the theoretically more stable sides of my family, my forebears typically decided to move around a bunch. Even within the bounds of my own history, my childhood was spent in the Netherlands, the United Kingdom, Austria, and the United States.

When I came along, a tiny zygote interrupting a life among the political activists of 1970s Berkeley, my parents decided to move to Europe. I’m sure it wasn’t exactly a no-brainer for them, but they were clear on their decision: they would prefer to have a child in Europe than the United States. That pattern continued throughout my childhood: we traveled for educational opportunities, and for work. It was a privileged existence in the sense that experiencing different cultures and living in different places is privileged; we didn’t have much money, and scraped to get by.

I’ve inherited that wanderlust, and I guess a sense of willingness to be somewhere new. There’s nothing wrong with its opposite - a desire to stay and grow roots, to be deeply settled - but that understanding didn’t come easily to me. There’s something almost genetic about not wanting to be in one place forever. There’s so much world out there!

I’m not at all jealous of the folks whose families have been in the same spot for generations. Again, there’s nothing wrong with it, but it feels like so much more might be possible. And I have to acknowledge that it’s a ridiculous stance, because so much of the traveling in my family history comes from trauma: it’s not so much that people just wanted to roam. They were forced out; their homes burned; their communities tortured and murdered. Perhaps there’s a virtue to be found in the resilience that’s a required outcome of that, but not so much in the act itself. These were atrocities.

Evan Prodromou wrote about this internal conflict on his blog yesterday. He’s wondering about his geographic legacy, and considering lessons from Melody Warnick’s book This is Where You Belong.

The book covers a lot of the reasons that staying put is more healthy physically and psychologically than constantly moving. It also has a number of commonsense recommendations for establishing connections to the place you’re living. Like: walk or bike more, so you see things up close. Volunteer. Meet people. Learn the history. Do what people who live there do.

To me, settling has always felt like settling: coming to a compromise agreement with the world. I feel like I need to erase that chip in my brain, and I haven’t quite found the way to do it.

I would love to settle in the sense of finding a comfortable place to rest, and in the sense of putting down real roots. I have not yet found a way to feel okay with it.

“Billionaire investor Chamath Palihapitiya is under fire for saying that he - and most Americans - "don't care" about abuses against the Uyghur minority in China. [...] Boston Celtics Forward Enes Kanter, who has been outspoken about human rights issues and campaigned on behalf of the forced labour law, was among those condemning the comments. “When genocides happen, it is people like this that let it happen,” he wrote.”

In support of the American Innovation and Choice Online Act

I’d like to informally join the list of technologists who support the American Innovation and Choice Online Act. Here’s the full text of the bill.

Specifically, the bill would prevent “covered platforms” from prioritizing their products and services over those provided by other vendors in a way that would harm competition on that platform.

That could be interpreted to mean app stores and search engines: a “covered platform” is one that has at least 50M US-based monthly active users, at least 100K monthly active “business users”, and has either a market cap or revenues of at least $550B. It also needs to have the potential to “materially impede” access from a business to its users / customers, or to tools a business needs to service its users or customers.

It’s a good law. Neither search engine or marketplace vendors should have the ability to preference services made by that vendor over equivalent services made by others. Apple shouldn’t be able to promote Apple’s services over a startup’s on the App Store; Google shouldn’t be able to promote Google’s services on its store or in its search engine results. The result will be a better ecosystem for startups, independent projects, and software produced by co-operatives and collectives.

Similarly, the Open App Markets Act would prevent App Store providers from forcing app vendors to use the provider’s payments technology. Apple wouldn’t be able to require that subscriptions go through iTunes, for example. That’s a big change that, again, creates better terms for startups and helps to establish a more competitive ecosystem.

This is the kind of thing legislation should be doing: helping to enforce fairer markets that allow newcomers to compete with incumbents on a level playing field. I’m hopeful that these bills pass, and that they’re a precursor to real antitrust reform. In the light of today’s announcement around an overhauled merger approval process, we may be in luck.

A more competitive landscape is one where consumers have more choices and protections, and ecosystems are more open and innovative. These active steps to get there represent a change that’s been a long time coming.

“The Act, introduced by Senators Amy Klobuchar (D-Minn.), Chuck Grassley, would keep large platforms like Apple and Google from excluding competitor products. Specifically, it prohibits businesses from using a companies’ data to compete against it, biasing search results against competitors, or requiring other companies to buy their own services for preferential placement. It also keeps companies from preventing interoperability.”

“LinkedIn has been watching how different keywords correlate to engagement on company posts, and which words have been appearing more often in job listings on the site. The terms “flexibility,” “well-being” and “culture” all appear in LinkedIn posts more often than they did in 2019, LinkedIn revealed Tuesday in its 2022 Global Talent Trends Report. Company posts that use those terms also attract more engagement, LinkedIn found.” Shocking nobody but important to highlight.

“The program, which will launch early this year in King’s neighborhood, will send monthly payments of $850 to 650 Black women over two years, making it one of the largest guaranteed income programs to date. Guaranteed income — the concept of sending people cash payments with no strings attached — was featured in King’s 1967 book, “Where Do We Go From Here: Chaos or Community?” in which he argued that sometimes the simplest idea could be the most effective in ending poverty.”

Why companies are hiring sci-fi writers to imagine the future

BBC licence fee to be abolished in 2027 and funding frozen

“The culture secretary, Nadine Dorries, is expected to confirm that the cost of an annual licence, required to watch live television and access iPlayer services, will remain at £159 until 2024 before rising slightly for the following three years. She said this would be the end of the current licence fee funding model for the BBC, raising doubts about the long-term financial future and editorial independence of the public service broadcaster under a Conservative government.” This is big news - while the license fee is a regressive tax, the BBC’s status as a public broadcaster has been important. It’s, broadly speaking, a force for good. What happens now?

Look around you. The way we live explains why we are increasingly polarized

“Whether it comes to the climate emergency or systemic racism, the migrant crisis or the ongoing pandemic, so much turns on whether we can acknowledge and accept the intertwining of our separate lives. But it’s not just our homes that are styled now like defensive fortresses.” A superb portrait of modern American society.

Capitol rioters called Nancy Pelosi's office looking for a 'lost and found' for items they left behind on January 6, according to Rep. Jamie Raskin